At the risk of leaving the impression that we often dine at three-star restaurants, I want to recap our meal at Guy Savoy in Paris during our trip in January.  It was the first time in a long while that we’d left a high-end restaurant with the feeling that we’d really experienced something extraordinary.

Although we actually didn’t order beyond making it clear that we wanted the famous artichoke soup and the oysters in snow, here’s the prix fixe menu: 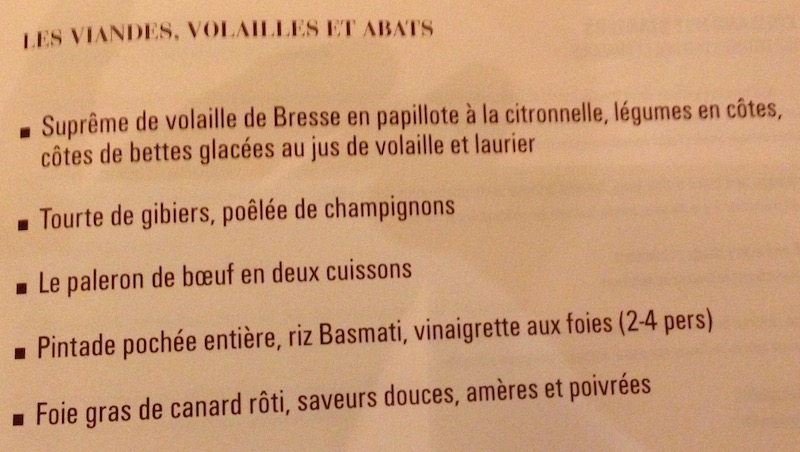 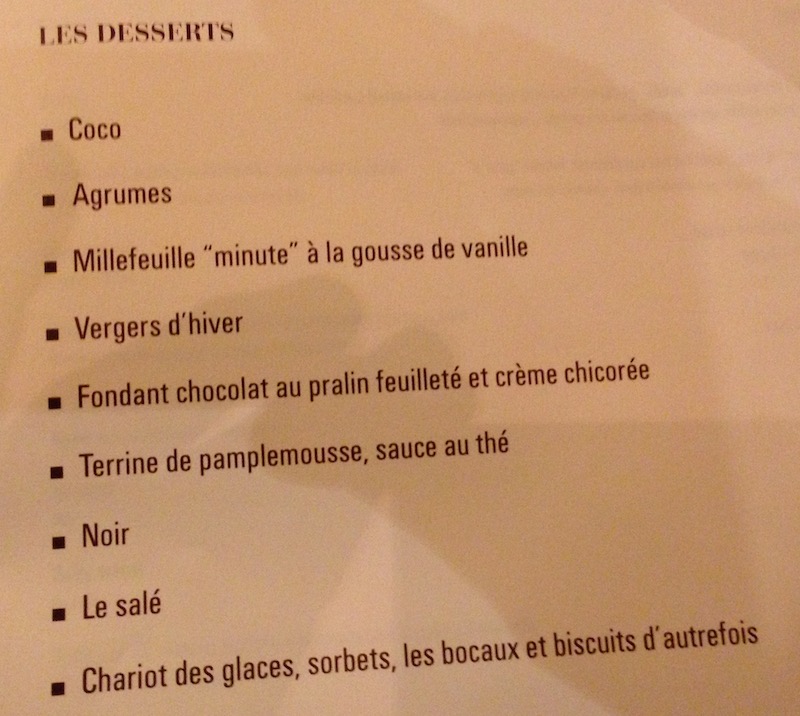 The amuse bouche was a tiny serving of a wonderful pea soup; I don’t remember what the garnish was. Perhaps a radish on some pesto-topped toast. 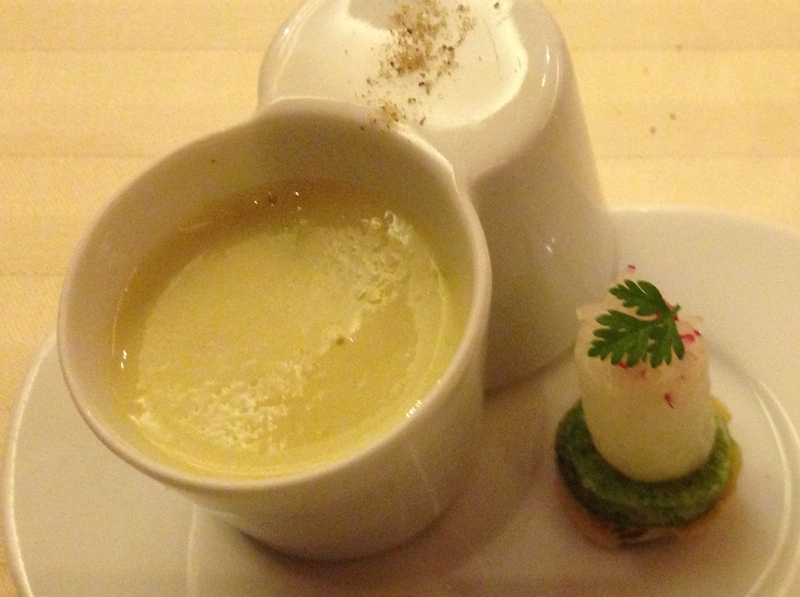 It was immediately clear upon seeing and tasting the artichoke soup why this had become a signature dish of Guy Savoy.  The truffles were certainly a significant part of it! 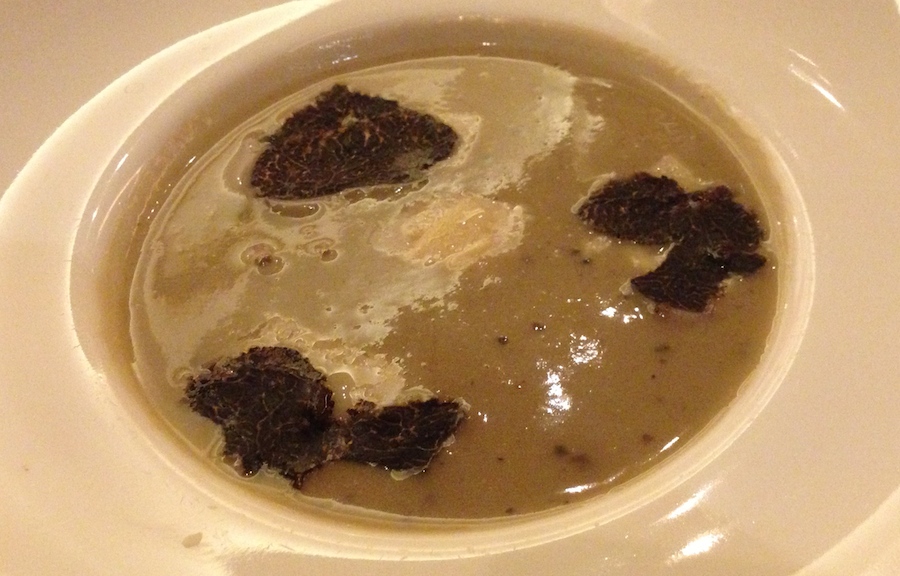 I think I’m right when I identify the next two photos as the “tourteau et toutes les couleurs de betterrave.”  A tourteau is an oil cake (the white ball). 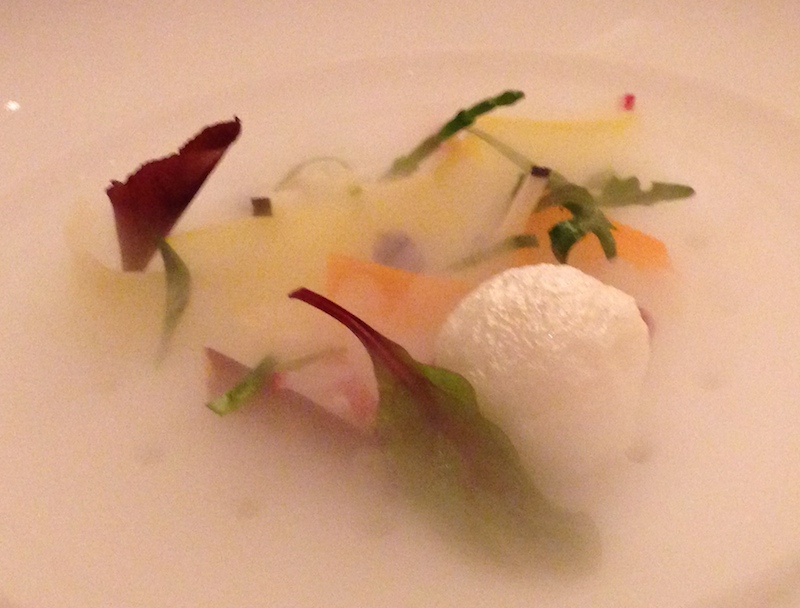 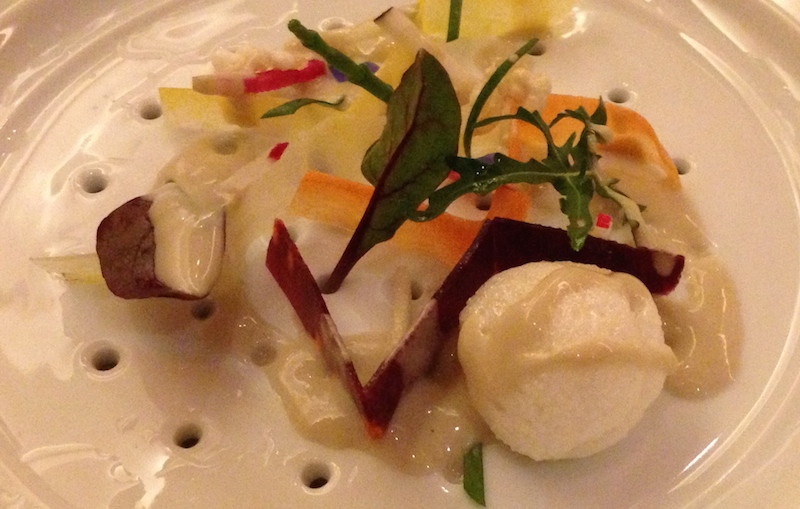 We were really looking forward to the oysters and weren’t disappointed. 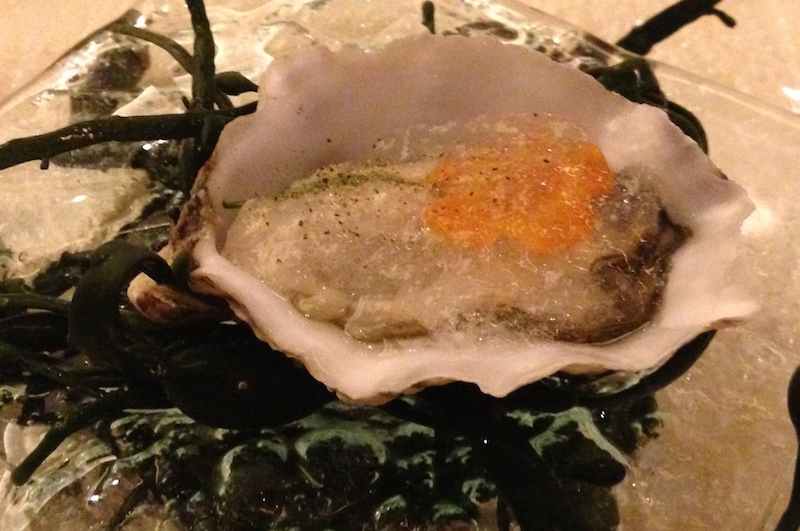 As you would expect, the rolls were magnificent and made even better by the truffled butter (you have to do something with the crumbs of truffle left over from slicing!). 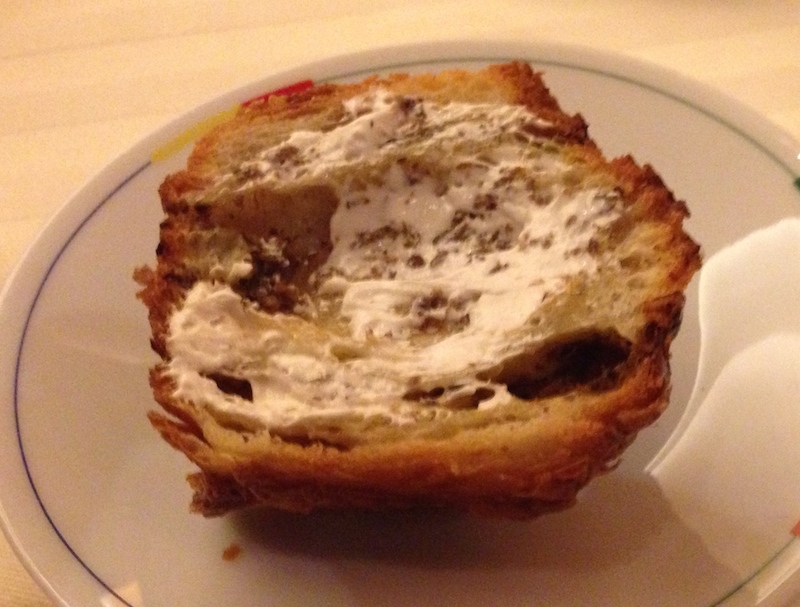 Our main course was the supreme de volaille de Bresse, another of Savoy’s signature dishes. 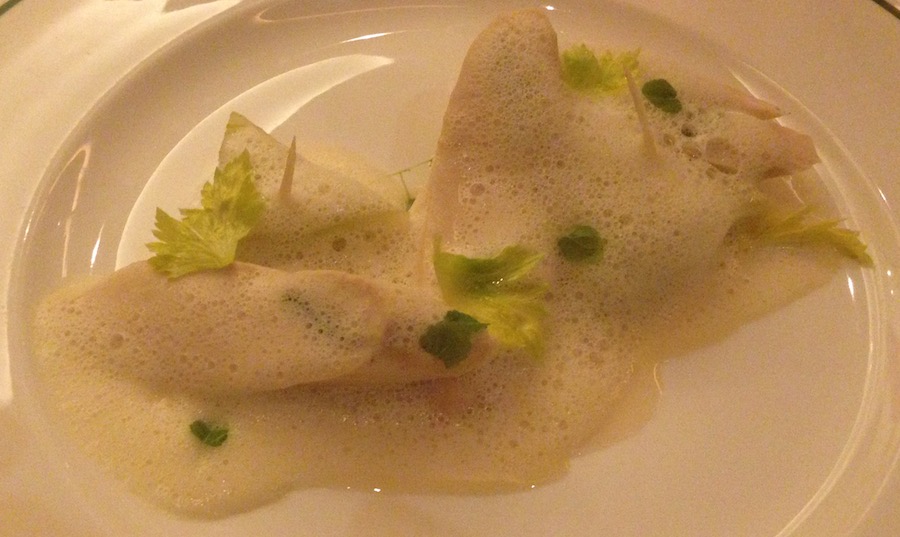 We are not big dessert fans (at least in fancy restaurants—pastry chefs seem to need to go over-the-top in order to be recognized, and we just want something tasty).  So I’ll pare down the four desserts to just this one. 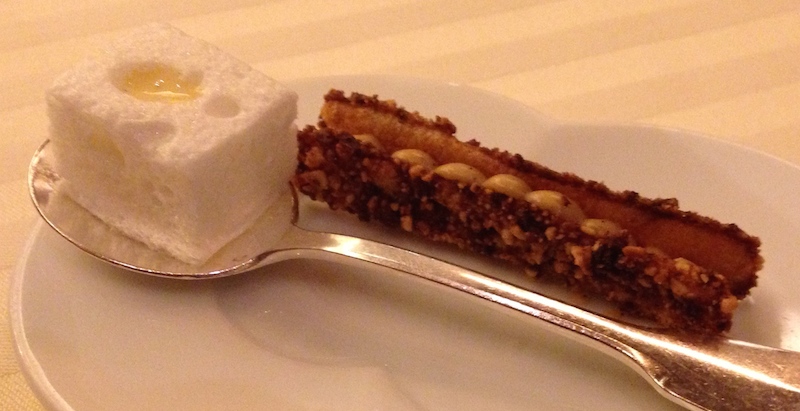 I think it’s important to relate that Savoy himself was very much in evidence: he came out to greet us shortly after we were seated and then, to our amazement, again near the end of the meal.  Of course, our French was not up to having a real conversation but we let him know how pleased we were with our meal.

When we left the restaurant, located in a very fancy part of the 16th arrondissement just east of the Arc de Triumphe, we were delighted to find that Savoy had opened a little hole-in-the-wall oyster bar directly across the street. 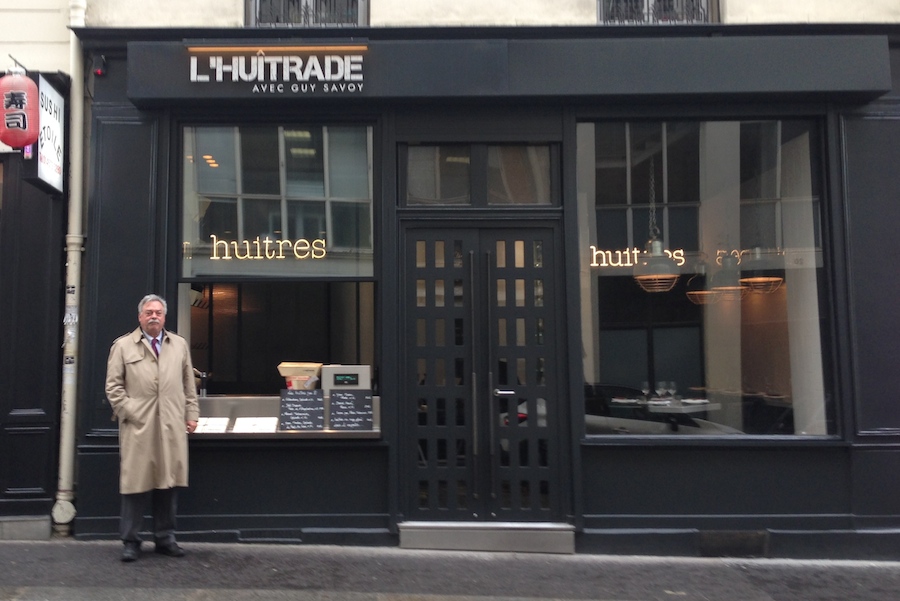 I’m standing beside the window through which passers-by can obtain oysters to go.  Because we were equipped back at the apartment with oyster knife and glove, we went home with eight premium oysters at a price that won’t be exceeded in my lifetime ($6 each) and a box that beats anything I’ve ever seen (but then I don’t shop in places where the whole point is walking out with a posh shopping bag). 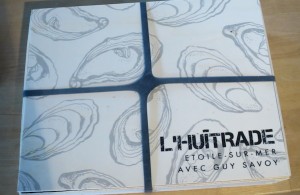 The oysters were HUGE (and delicious)! 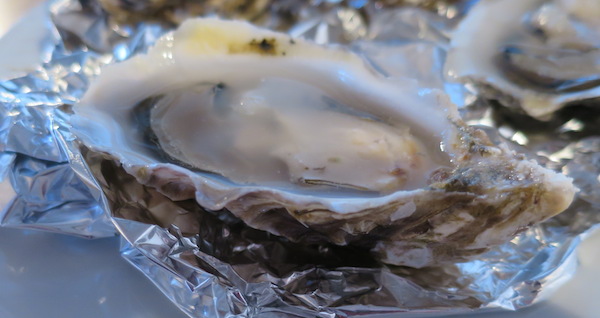 To wrap up: we arrived in Paris on the day of the Charlie Hebdo shootings and the whole city was clothed in “Je suis Charlie” signs.  Here’s a scene outside the Centre Pompidou: 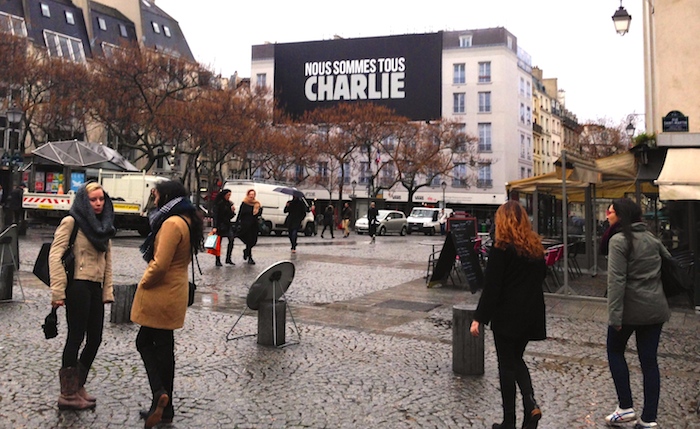 And here’s the cover of Charlie Hebdo which came out just after the incident. Parisians were standing in long lines to purchase it and, although it was said that the print run was two million, we were unable to buy one. 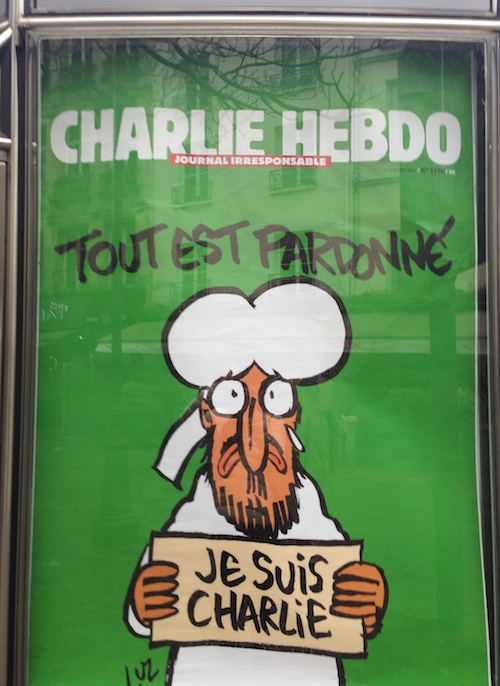 Posted in Uncategorized | Comments Off on Retrospectively: Guy Savoy in Paris in January