Corby Kummer’s recent review of Art+Science in Boston Magazine described it as the best indication of what’s happening now in the Boston food world and was enthusiastic.  Since we had gone a month or so ago and not been particularly impressed (save for two dishes which were commendable), I should have known better when I read his comment that last year it was Asta that held that honor.  I remembered that it had gotten good reviews and thought that it would be a good candidate for our we-have-to-go-out-to-eat-from-time-to-time list.  On a Saturday night, the few tables took until past 8 to fill so perhaps we just don’t keep our ears close enough to the ground.  The food was arty in the extreme according to today’s fashion (I’m willing to tolerate that), the flavors mild and uninteresting, and the value near rock bottom.  Here are the details.

The  menu was prix fixe with a choice of three, five, or eight courses.  As you can see, having given up the ability to select paricularly appealing dishes, you are also left virtually in the dark about how the ingredients are prepared.  As we always order as many things as possible, we decided on one three-course and one five-course dinner supplemented with the seared foie gras. 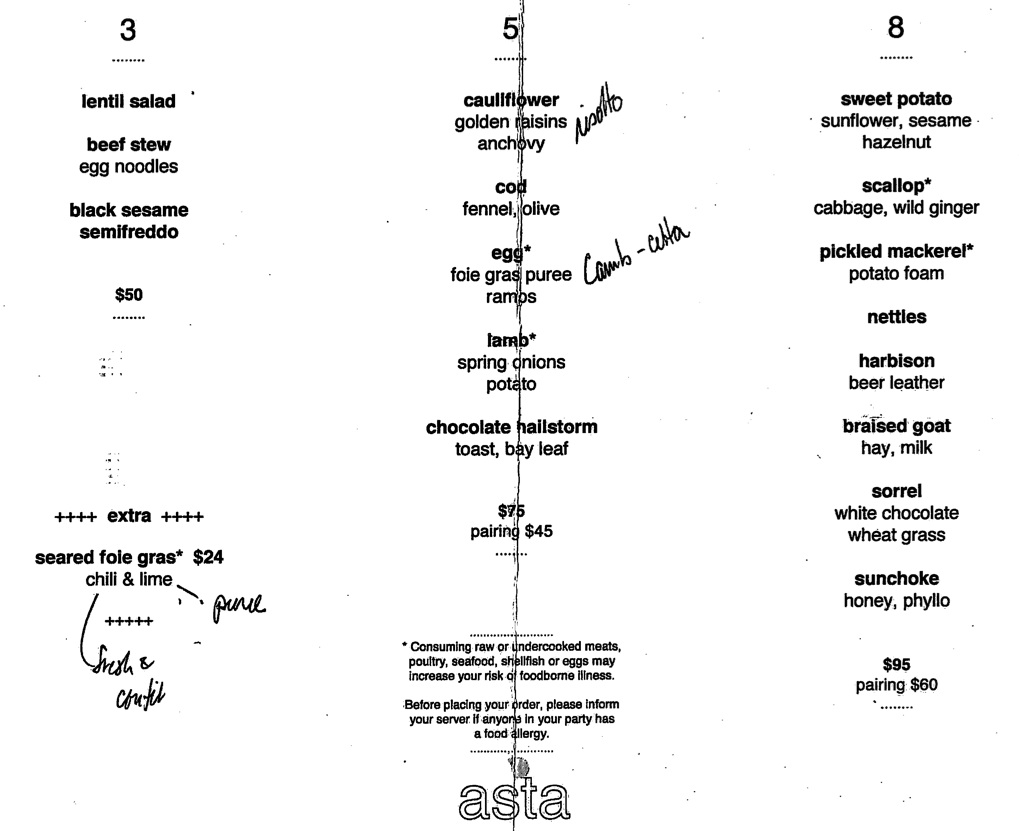 The amuse bouche seemed a good omen even if straightforward: fava beans with pickled radish. 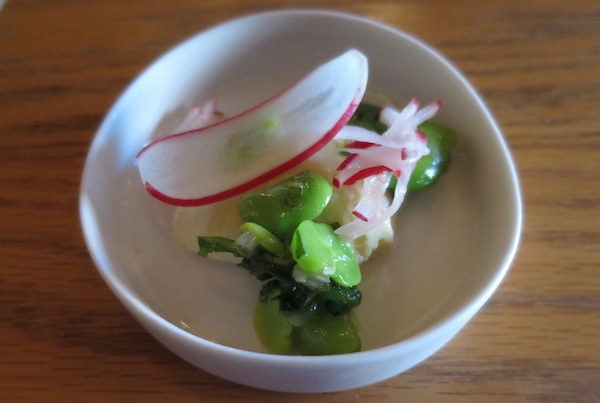 The cauliflower risotto was among the best of the dishes, nice balance of cauliflower, raisins and anchovies. 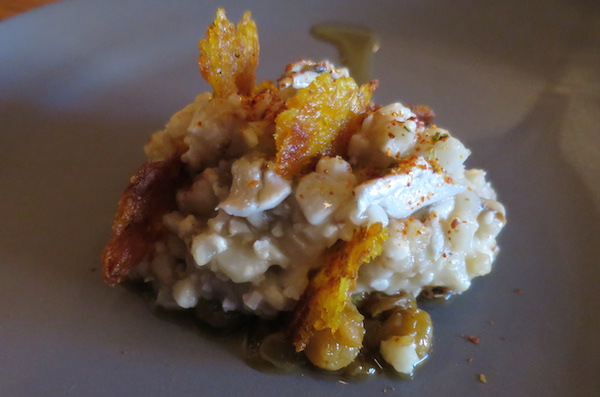 The lentil salad was mostly kale.  If you look very closely, you’ll spot a few lentils hiding in the crevices.  The flavor was strictly kale, however, even if fresh and appealing. 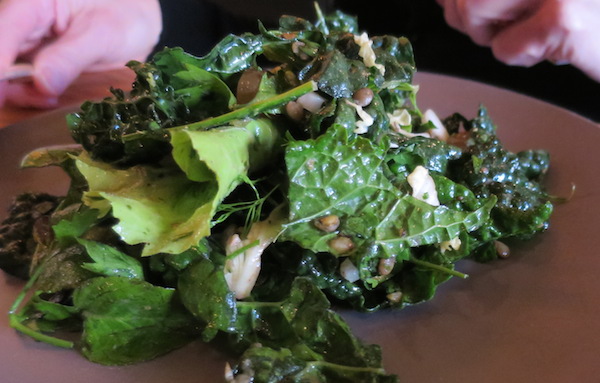 The “cod, fennel, olive” was again straightforward: nothing innovative here.  And not about to fill you up. 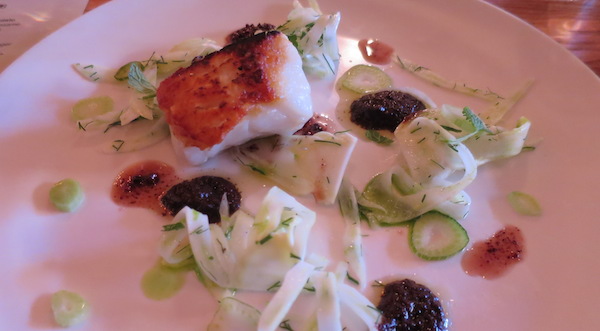 The most curious dish of the evening was the “egg, foie gras puree, ramps.”  There was indeed a small poached egg under the greens!  We were told by the server that the dish included “lamb-cetta, like pancetta but from lamb” (the slender slices standing up on the left). So I guess I have to rack that up as a first but, again, nothing to write home about. 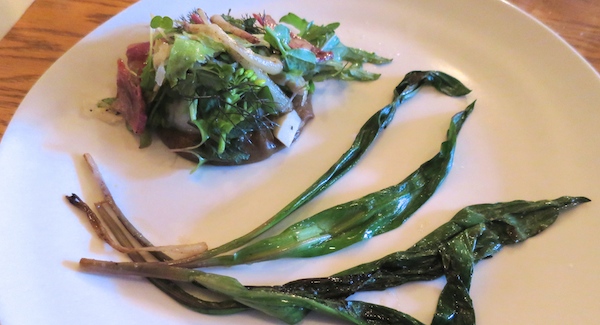 So, at last we came to the foie gras which the kitchen had kindly agreed to serve on two plates.  A reasonable portion, expertly cooked, but it had cooled off considerably by the time it reached us.  The lime puree had very little lime flavor and the chili even less but the plate looked pretty! 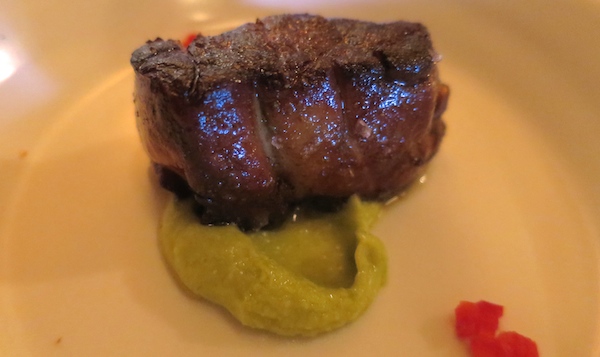 Next we had the “lamb, spring onions, potato” and “beef stew, egg noodles” served simultaneously.  The lamb was properly dark pink and the onion nicely charred.  In all, a highly commendable dish and the best of the evening. 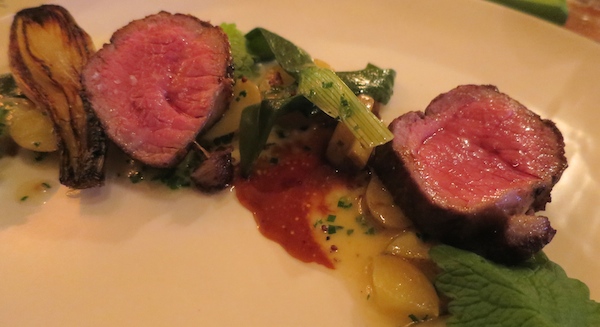 The beef stew, however, was a total disaster.  The very thick house-made noodles were seriously undercooked and the stew itself was as boring as could be.  I don’t think I’ve ever seen a beef stew, even in a diner, without some pearl onions and carrots to give it some visual interest.  The nasturtium leaves seemed to be more a disguise than a garnish.

The desserts were well-done, a milk toast with chocolate, and a semifreddo with freeze-dried strawberries.  (I need to look for that on Amazon!)  Since we’re not fans of restaurant desserts, these perfectly satisfactory ones did little to boost our spirits which were pretty low at this point. 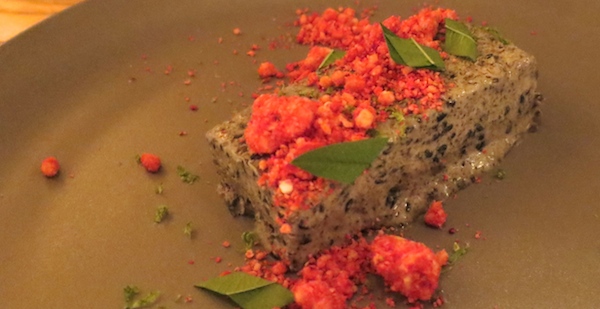 So, let’s turn to the value question.  Aside from the $29 for two glasses of average wine, we paid $186 (with tip).  Was it a good idea to select the three-course menu?  Well, if we allocate $10 for the dessert (certainly adequate on an a la carte basis), the the lentil salad and beef stew were each $20 dishes.  I doubt that anyone could stay in business trying to sell a kale salad for $20, or that particular botch of a beef stew for $20.  So, no, not a good idea; a particularly costly error.

Am I an aging, cantankerous curmudgeon.  Perhaps.  But I’m looking forward to what I consider the proof that this was a much-too-expensive dinner for what was delivered: next weekend, we’ll shop for a blow-out meal at home; $100 for ingredients, $100 for wine, and we’ll have $15 left to go to Bartley’s the next night.

Comments Off on Asta: Skip It!