Attended the Culinary Guild of New England Supper Club tonight at Basho, a very large and serious Japanese restaurant on Boylston Street in the Fenway Park area. A remarkable meal which should be brought to the attention of other Japanese food lovers.

First course was home-made organic (?? — what would you call the other kind?) tofu with edamame and spicy tuna on a rice cracker. All terrific with the tuna a standout. 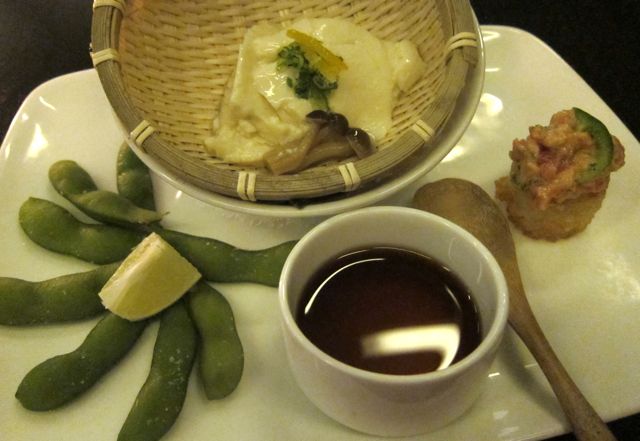 Finally, an assortment of nigiri and maki such as I’ve never experienced. The nigiri were mackerel, salmon and yellowtail, each with a terrific garnish of, for example, cilantro aioli, jalapeno, etc. The maki were spectacular: tempura shrimp and crab, tuna around avocado, and soft shell crab inside “white tuna” (which is really a very white and oily variety of mackerel from Hawaii). 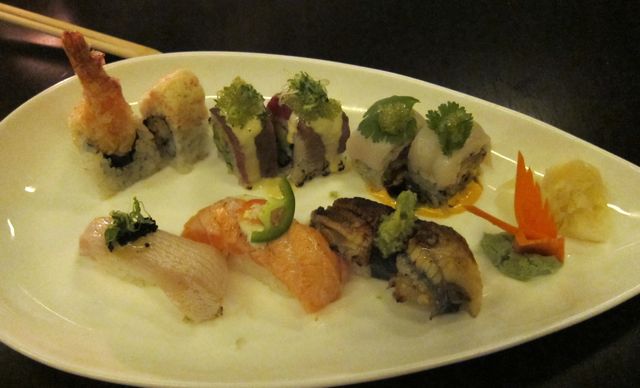 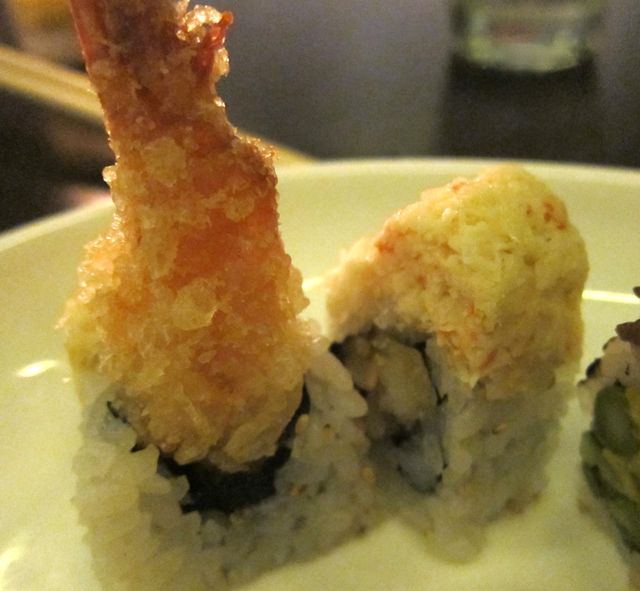 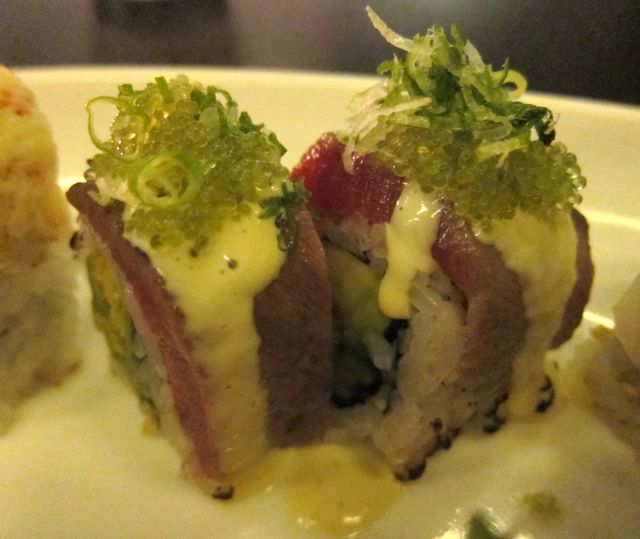 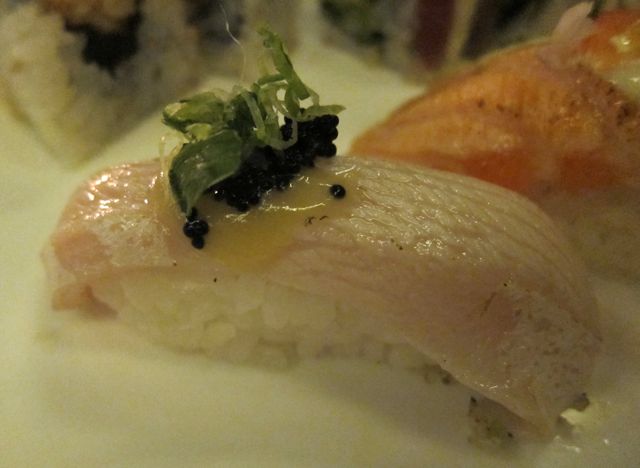 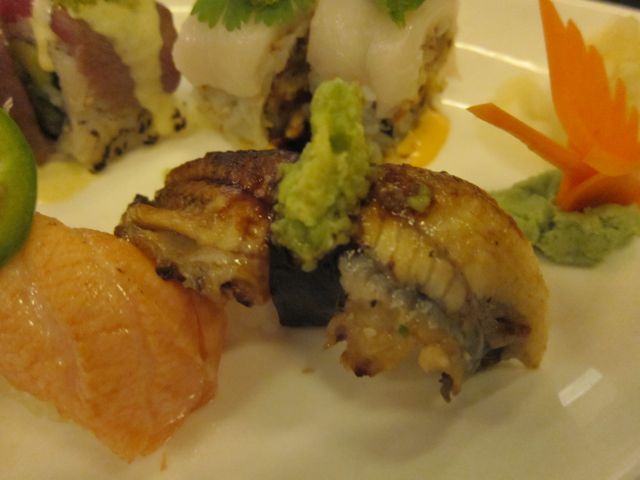 And the incomparable soft-shell crab maki with white tuna: 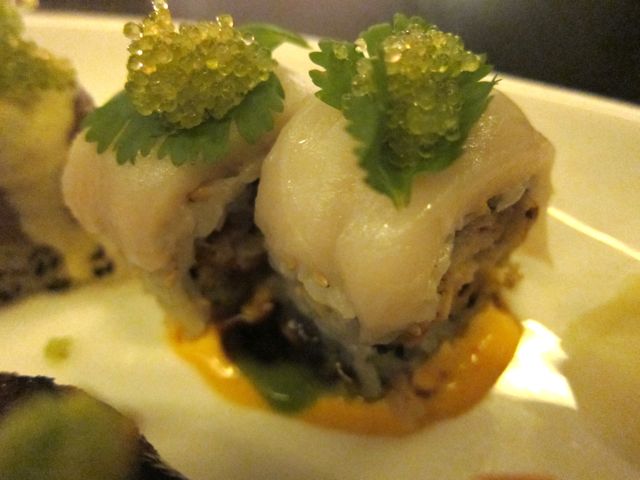 As a relatively new member of the La Confrerie de la Chaîne des Rôtisseurs, an international culinary group, I attended their fall black-tie event last night at Menton, Barbara Lynch’s (and her financial backers’) bet that Boston is ready for really high-end dining. The four-course prix fixe menu goes for $95 while the chef’s seven-course tasting menu is $145; if you’d like wine with the latter, add $105 for a nice round $250 per person.

Happily, I was seated at the chef’s table in a hermetically-sealed room adjoining the kitchen where I could see all 17 of the kitchen staff doing their thing or, mostly, milling around waiting for the service of the next course. We had taken over the entire restaurant so the service was discontinuous and, given the four-hour length of the meal, there was a lot of downtime. 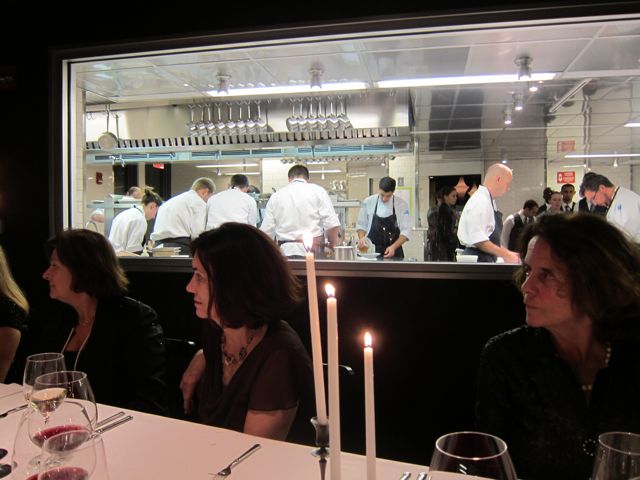 The meal began with a bang with this fine Butter Soup with meaty chunks of lobster and a littleneck clam. The nine black dots were called “caviar” on the menu. Don’t overlook the flower in the middle: I hope it was edible but at that size there’d be no harm done in any case! 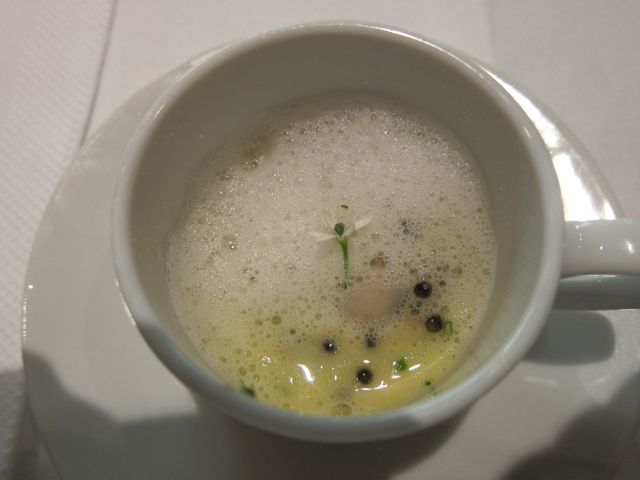 The second course was “Shetland Salmon Chaud-Froid” with white sturgeon caviar and root vegetables: about as much salmon as one would get in two small slices of sashimi, just barely cooked and coated with horseradish flavored crème fraîche. Unfortunately, the minuscule amount of horseradish could not be tasted (a serious error) but I thought the idea was wonderful and I’ll be trying to duplicate the intention at home very soon. (We had a good discussion of whether the salmon had been cold-steamed, starting with cold boullion, or simply plopped into a microwave for sixty seconds. Could have gone either way.) 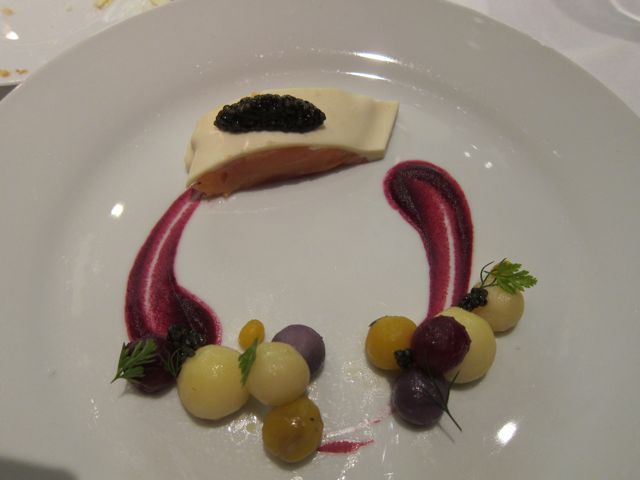 Then on to the East Coast Halibut in a corn velouté with chanterelles and scallion. The fish was properly seared and the corn velouté was tasty (if a bit weak) but the filled pasta (not described on the menu) was tasteless even if pretty. 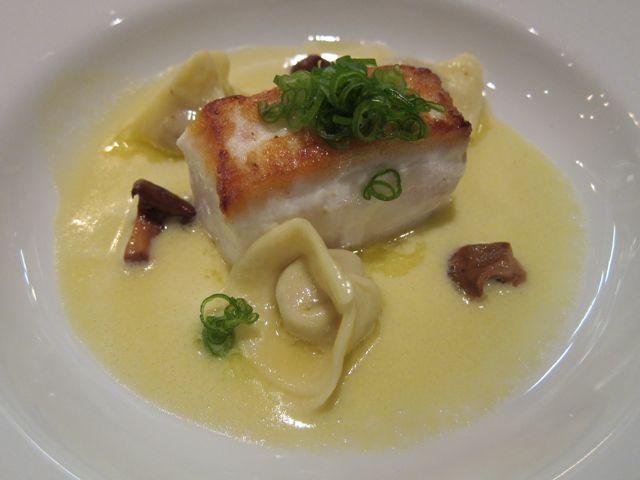 Onward to the pheasant pot au feu with a quenelle-shaped forcemeat blob said to contain both foie gras and truffles. As you can infer, I tasted neither in that dry, unappetizing excuse for using up the legs of the pheasant. The pheasant breast was delightful and the vegetables, all different, were quite competent. 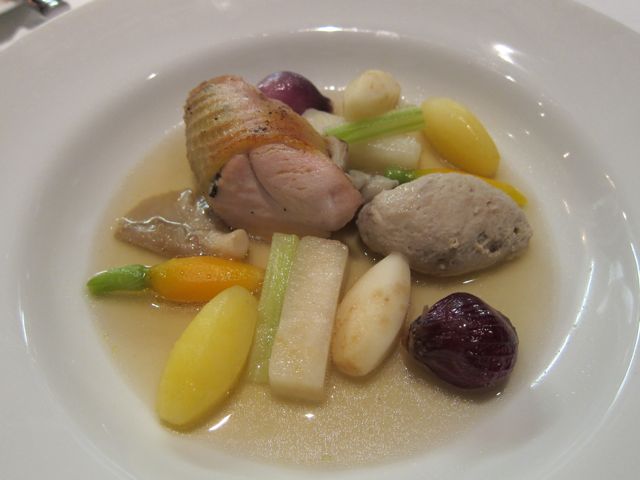 Finally, the meat course: Short Rib of Beef, beef tongue, mille-feuilles potatoes and “bone marrow” (could that have been the green stuff?) with a thin slice of mushroom masquerading as a truffle. All perfectly fine if a tad unimaginative. I do have to give them credit for serving tongue (one of my favorite things) and, I suppose, credit for cleverly using only the designation “langue de boeuf” on the menu. 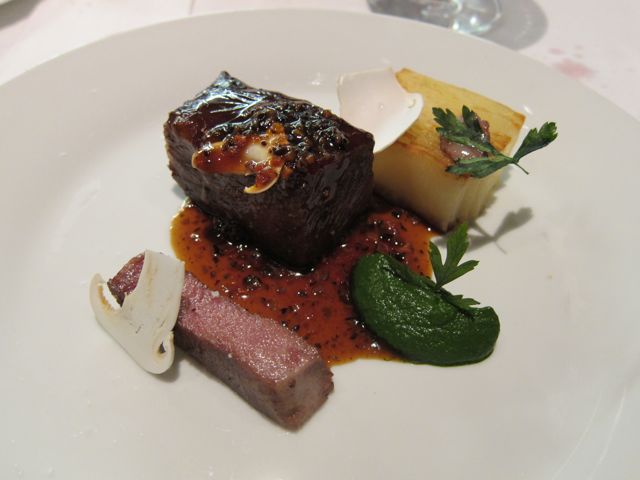 The dessert; ah, the dessert, described as “Apple Tarte Tatin.” One of my sharpest pet peeves is the restaurant practice of using the name of a well-known dish to describe a home-grown variation which is wide, wide of the mark. As you can easily see, the thing that was served bore no more relationship to Tarte Tatin than that they both contained apples and that an unsuccessful attempt had been made to caramelize these. The vanilla glace was good and the apple chip is a wonderful trick that we’ll demonstrate at our October 6th meeting. 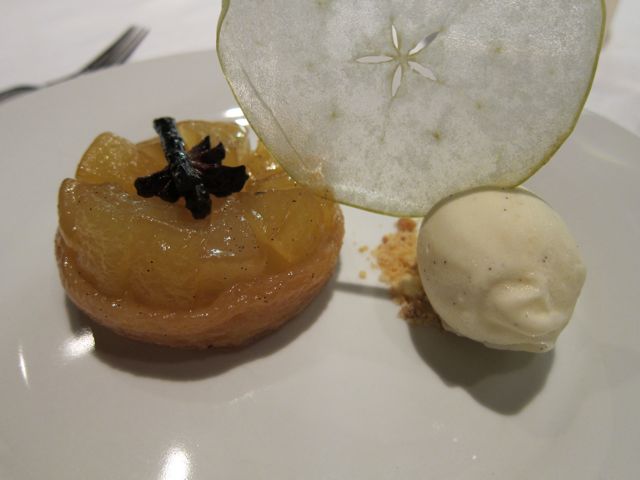 Loose ends: The wines were very fine, properly paired with the food, and served in generous portions. The cheese course did not exist and I consider this a major flaw (perhaps due to Chaine and not Menton).

The bottom line: really good high-end French food of the sort one finds, for example, at Georges Blanc in France, is simply not available in the US in my (admittedly) limited experience. (See my earlier review of La Grenouille, New York City’s last fine French restaurant.) This is not, in my opinion, a great shame in the big picture. It’s the sort of thing that requires a very large investment, in time, in money, and in experience eating French food. While the pleasures to be had at a successful meal of this kind repay the investment, there are many other less demanding ways of getting the equivalent pleasure. I wish those alternatives also received the attention and acclaim accorded to fine dining in the French style.